7 ideas, 2 stories and a poem – selected by Tom OConnor

“The difference between a dream and a goal is a deadline.”
Napoleon Hill

Facebook and Dignity
That shouldn’t be an oxymoron.
by Emuna Braverman
How much sharing is, as they say, TMI (too much information)?
Is it the former GSA Pacific Rim administrator posting a picture of himself in the bathtub with a glass of red wine during his scouting trip to Las Vegas? (It’s almost a party game deciding which aspect of this photo is the most disturbing one!) Is it Roseanne Cash (the famous singer’s daughter) tweeting to her 43,000 plus followers about the challenges in her marriage? Is it pictures of the fancy gourmet dinner your friend made last night that surely puts the rest of us to shame? Almost anything could qualify, depending on context and viewers.
We begin our morning prayers with the blessing uttered by the non-Jewish prophet, Bilaam, “How goodly are your tents O Jacob, your dwelling places, O Israel.” He wasn’t praising our camping skills or our artistic talents. What he noticed, the commentaries suggest, was the sense of modesty and privacy inherent in the structure of the community. No one’s door faced into anyone else’s home. What happened inside was not for sharing, wasn’t anyone else’s business, was private and sacred. A sense of dignity was preserved.
Nowadays, everywhere we look, the opposite is true. We’ve opened the doors and rolled up the shades, revealing all to the world outside – without a second’s thought or a moment’s sense of shame. No one stops to question whether it is appropriate.
How can we preserve our marriage if we let 43,000 strangers in on our struggles?
We’ve forgotten that our home and our family are something special, something to safeguard and preserve. We’ve stopped noticing that something precious has been lost with each further encroachment on our privacy.
Click here to receive Aish.com’s free weekly email.
The most egregious examples are the easiest to learn from. How can we preserve our marriage if we are willing to let 43,000 strangers in on our struggles? Not to mention the fact that in Jewish consciousness, embarrassing someone is like killing them. (Our jails today don’t have near enough room for all the guilty parties!)
How can we maintain a healthy relationship with our children if we reveal their foibles for the world to see – on our daily television show, newspaper column, or online blog?
And most importantly, how can we maintain our own sense of self-respect if all of our life experiences, all our innermost thoughts and goals along with every momentary impulse are expressed on our Facebook page? Facebook seems to have the dubious distinction of making exhibitionism and voyeurism socially acceptable.
Daniel Henninger of the Wall Street Journal suggests that we’ve lost all sense of discretion as well as many other crucial and valuable character traits (WSJ 4/26/12):
“Discretion, before its recent death, had many allies – judgment, common sense, prudence, reticence and the two better selfs, self-control and self-discipline.”
I would venture further. Discretion is an aspect of modesty. In the midst of serving the body, we’ve lost our souls. We’ve stopped thinking before we speak. We’ve ceased carefully examining our words before using them. We no longer worry about material excess or bodily indulgence. We’ve stopped trying to preserve our inner core. We’ve stopped noticing our inner core. When everything is public, as my husband would say, “There is no longer any there there.” We’ve lost touch with our souls. We’ve lost track of what’s truly important and of who matter’s the most
Apparently young couples are now negotiating social media rules – what is okay to share and what isn’t. This should be obvious but we’ve lost perspective. Traditionally, the more precious something is, the more we want to protect it – and vice-versa.
We live in an upside-down world where the most important personal details are revealed almost before we say hello – and frequently on national television.
But we don’t have to participate. We can take a step back. We can build some fences. We can try leaving Facebook and Twitter and Pinterest and all social media out of our marriages and personal lives. (I dare you!) We can build our inner world and have the confidence that it can withstand the buffeting of the outer one
.
We shouldn’t post or tweet about our marriages. It coarsens and devalues this holy institution. It embarrasses our partners. And we shouldn’t post or tweet about ourselves. We should have too much self-respect and self-esteem to invade our own privacy in that way. If we could really exercise and promote this level of restraint, we would change society. True, some magazines might go out of business and some shows off the air but the public discourse would be on a higher level and we would all be able to rediscover our spiritual centers.
Our ancestors were on to something. We need goodly tents and dwelling places – not just for shelter, but in order to preserve our essential humanity and sense of self.

Discouragement and failure are
stepping-stones to success.
~Dale Carnegie

Lag B’Omer & Gratitude
Tony Robbin’s secret to happiness and achieving success.
by Rabbi Efrem Goldberg
Years ago, someone gave me a Tony Robbins cd to listen to. I was excited to hear what one of the most inspirational people of modern times would have to say and how it could change my life for the better. He started his talk by saying that he has the secret to both happiness and success. If you follow his advice and begin each and every day of your life exactly as he prescribes, he can all but guarantee you will find yourself both happier, and achieving your goals and dreams.
I was very eager to hear what his secret is.
What Tony Robbins said is correct, but for me, and for you, and for Jewish 3 year olds around the world, it was nothing new. The secret to happiness and to achieving success, he said, is to start every day of your life by expressing gratitude. As soon as you wake up, before doing anything else, say thank you. Be grateful and appreciative for being alive, having a roof over your head, having your health if you are lucky, your family, etc.
He continued that it isn’t enough to think appreciatively, but you need to start your day by verbalizing and actually saying thank you out loud. If you do, the rest of your day is guaranteed to be successful and happy.
What Tony Robbins is teaching in the 21st century, Judaism has taught since its inception thousands of years ago. From an early age, we teach our children to wake up saying Modeh ani lefanecha, I am grateful to you God for the fact that I woke up, that I am alive to see another day, for the wonderful blessings in my life and for my relationship with You.
It has been inculcated within us from our youth that we don’t wake up feeling entitled, deserving and demanding. Rather, we wake up with a deep and profound sense of gratitude, appreciation and thanks.
In my experience, Tony Robbins is right. How we start our day has an incredible impact on how the rest of it will go. This week we will celebrate Lag B’Omer, the 33rd day of the Omer. Each day of the Omer is characterized by another kabbalistic attribute. Lag B’Omer is Hod sh’b’hod, the glory of glory, reflecting our appreciation of God’s greatness and glory. The Hebrew word hod can be understood as coming from the same word as hodu, or modeh, meaning thanks. Lag B’Omer is a day characterized as “thankfulness within thankfulness,” or a day to celebrate gratitude.
Lag B’Omer is a day characterized as “thankfulness within thankfulness,” or a day to celebrate gratitude.
The Chassam Sofer, Rav Moshe Sofer says that the miraculous manna that fell from Heaven began to descend on Lag B’Omer. On the first day, the manna was undoubtedly greeted with great enthusiasm and appreciation, but as time went on and there was an increasing expectation the heavenly bread would descend, it became much easier to take it for granted and to forget to be appreciative for it at all. Therefore Lag B’Omer is a time that we identify and say thank you for all of the blessings that regularly descend into our lives, but unfortunately, like the manna, that we take for granted.
Related Article: The Mystery of Lag B’Omer
It is so easy to fall into a sense of entitlement and to forget to be grateful. Why should I thank my children’s teachers? They’re just doing their job. Why should I be so appreciative to the waiter, or the custodian, or the stewardess? Isn’t that what they are supposed to do? When was the last time we said thank you to whomever cleans our dirty laundry? Do we express gratitude regularly to our spouse who shops, cooks dinner, or who worked all day to pay for dinner, or in some cases did both?
As we celebrate Lag B’Omer, let’s not just say modeh ani in the morning and then quickly transition to feelings of entitlement. Let’s remember to say thank you to the people who do extraordinary things in our lives. But even more importantly, let’s especially express gratitude to the people who do the ordinary things that make our lives so filled with blessing.

Love is that condition in which
the happiness of another person is essential to your own.
~Robert A. Heinlein

The Magic Of Love
Love is like magic And it always will be.
For love still remains Life’s sweet mystery!!
Love works in ways That are wondrous and strange
And there’s nothing in life That love cannot change!!
Love can transform
The most commonplace
Into beauty and splendor
And sweetness and grace.
Love is unselfish, Understanding and kind,
For it sees with its heart And not with its mind!!
Love is the answer That everyone seeks…
Love is the language, That every heart speaks.
Love can’t be bought,
It is priceless and free,
Love, like pure magic,
Is life’s sweet mystery!!
– Helen Steiner Rice –

Life has many twists and turns and sometimes what looks like a very bad day is just clearing the way for good things to come.
– J Kim Wright

Champions keep playing until they get it right.
~Billie Jean King

The pessimist complains about the wind; the optimist expects it to change; the realist trims the sails, tacks into the wind … and sails on.
~William Arthur Ward

If you believe in yourself and have courage, determination,  dedication, and
competitive drive and if you are willing to sacrifice for things that are worthwhile,
anything  can be done.
– Vince Lombardi   …with a few edits 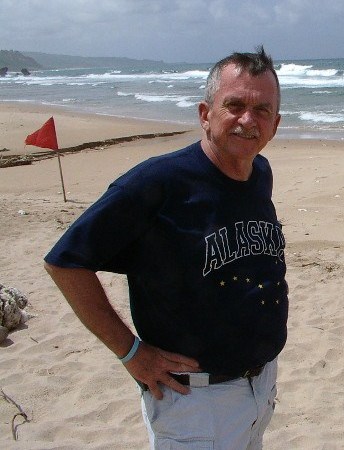 On the Atlantic coast of Barbados …with a storm approaching

For those who have gone in harms way on your behalf.
Move forward …resolute