This “Positive Ideas” news letter goes out once a week or so to about 750 friends and colleagues around the USA and in various locations overseas.

Security does not exist in nature nor do the children of man as a whole experience it. Avoiding danger is no safer in the long run than exposure to danger. Life is either a daring adventure, or it is nothing.

~Helen Keller …with a few edits

“I studied the lives of great men and famous women, and I found that the men and women who got to the top were those who did the jobs they had in hand, with everything they had of energy and enthusiasm.” – Harry Truman

Kindness is an inner desire that makes us want to do good things even if we do not get anything in return. It is the joy of our life to do them. When we do good things from this inner desire, there is kindness in all we think, say, want and do.

What you do today can change the course of your life far into the future. What you do Today is critical. Today really counts.

It has been 236 years since 56 brave men signed their names to the Declaration of Independence, proclaiming that the 13 original American Colonies were no longer willing to live under tyrannical British rule.

Those men, among them some of the most notable names in American history, risked their own safety and that of their families by signing the document; they were still in the earliest stages of a war against an enemy that outgunned them and was better trained. By signing their names to the very spirit of Patriotism, the men risked being hanged in the event of defeat.

But they were not alone. Thousands of the signers’ fellow countrymen had already taken up arms against the British in the name of American Independence. Seven bloody years after the signing of the Declaration and eight bloody years after the initial shots at Lexington and Concord, a new, free, republican Nation was born.

Those 56 who risked their lives by signing their names to a document that declared in no uncertain terms that they meant to create a better place where freedom reigned supreme might have trouble recognizing their Nation today. Given the state of political discourse and the tendency for bureaucracy to destroy freedom in order to increase centralized power, the Federal government has effectively come to represent much of what those men disdained in the Declaration.

Take the time to read the Declaration of Independence in its entirety. For a thorough historical background and to better understand the Declaration’s signers, read They Signed for Us which was written by Merle Sinclair and Annabel Douglas McArthur and first published in 1957. If you have a little more time, visit readthedeclaration.com to request a free copy of the Declaration and the Constitution and add your name to the list of Americans who read the founding documents over the holiday. To top it all off, write a letter to your Senators and Representatives to let them know that you agree with the principles your Nation was founded upon, and request that they legislate accordingly.

Kindness is an inner desire that makes us want to do good things even if we do not get anything in return. It is the joy of our life to do them.

When we do good things from this inner desire, there is kindness in all we think, say, want and do.

“A Dictionary is the only place that success comes before work. Hard work is the price we must pay for success. You can accomplish anything if you’re willing to pay that price.”
– Vince Lombardi

You become like the 5 people you spend the most time with. Choose carefully.

-As A Man Thinketh

“Character, in the long run, is the decisive factor in the life of an individual and of nations alike.”
– Theodore Roosevelt

Thanks for the good you are doing today

and the prayers you are saying today,

Particularly the prayers for those

Going in harm’s way on your behalf. 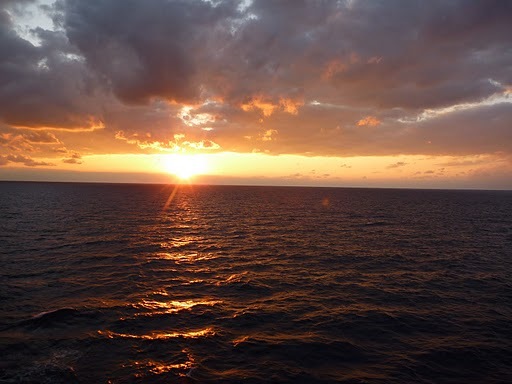 Sunset at Sea Off the coast of Central America